A visualization of the projects is available on the TAP MAP on the TAP website.

From these applications, up to 100 will be selected to be displayed at the “Cities and Regions Pavilion – TAP2015”, which will be located at the Le Bourget site of the crucial UN Climate Conference (COP21) in Paris this December. The Cities and Regions Pavilion is jointly hosted by ICLEI, the City of Paris, and the City of Bristol. Both cities have submitted applications to the TAP.

The TAP selection panel will look for applications that are ambitious, inclusive and cross-cutting, as explained in this blog post. Selected cities will be informed at the end of October.

Although projects have not yet been selected, ICLEI is profiling some on a blog series called “TAPplications”. So far, profiled cities are:

TAP and the Compact of Mayors

Of the cities that have submitted applications to the TAP, 32 are also committed to the Compact of Mayors – the world’s largest coalition of city leaders addressing climate change by pledging to reduce their greenhouse gas emissions, tracking their progress and preparing for the impacts of climate change. 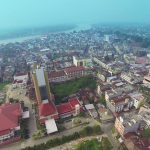 TAPplications: The Ecologist City of Jambi, IndonesiaCase Study
OECD joins the TAP as a partner organizationNews